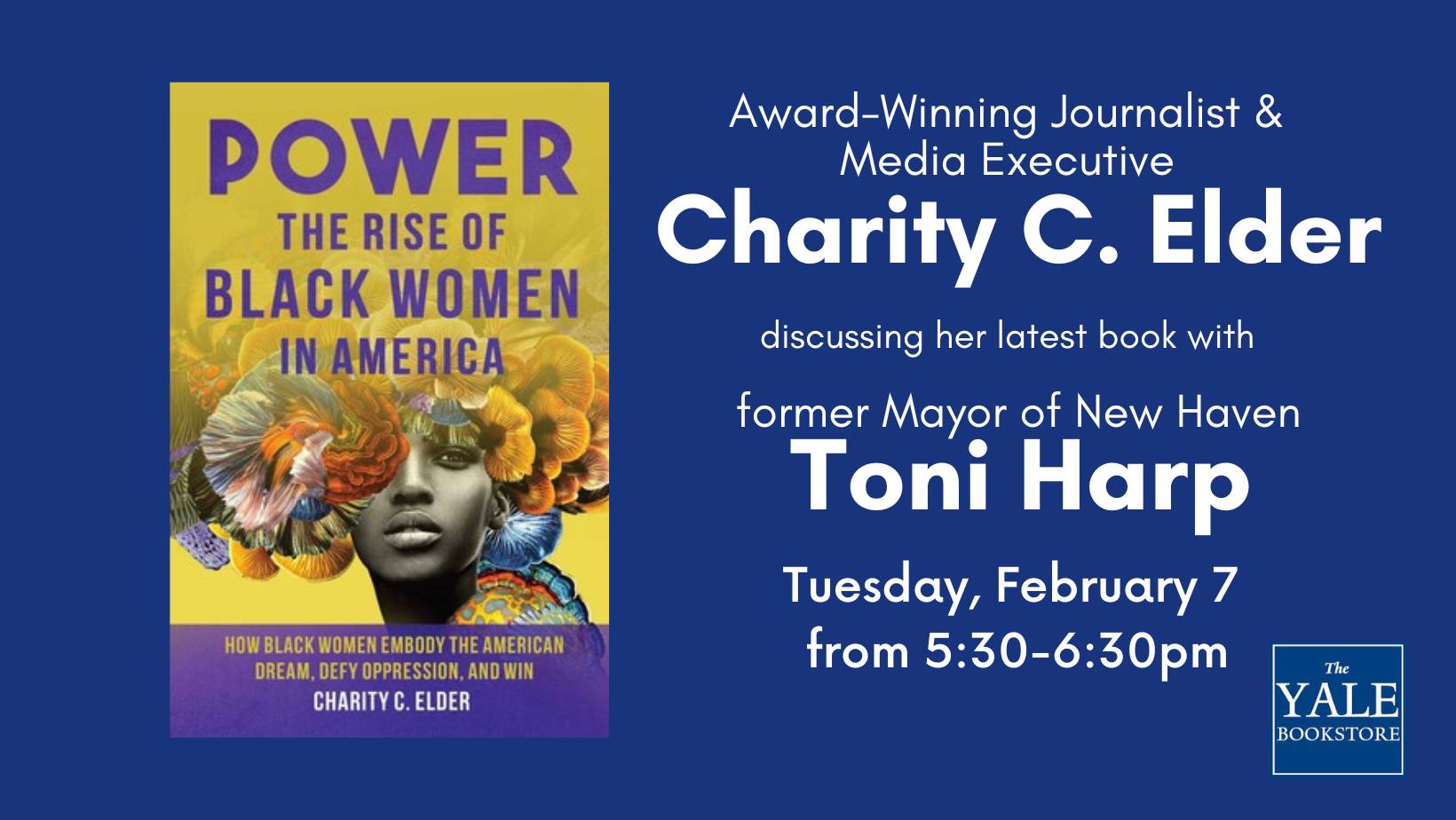 Join us to hear award-winning journalist and digital media executive Charity C. Elder in conversation with former Mayor of New Haven Toni Harp discussing her recent book, POWER: The Rise of Black Women in America. In POWER, Elder posits that there has never been a better time to be a Black woman in the United States.

ABOUT THE BOOK:
POWER is an incisive disquisition on Black womanhood weaving theoretical frameworks of history and sociology with poignant interviews, ethnographic observation, and anecdotes gleaned from history, social media, pop culture, and the author’s lived experiences.

Using data, the author substantiates the triumph of Black women. Original analysis of eighty years of US census data, prepared by the University of Minnesota and analyzed by Dr. Constance F. Citro, documents the remarkable ascension of Black women since the early twentieth century. An exclusive national survey conducted in partnership with the Marist Poll in 2021 not only reveals that 70 percent of Black women say they have been successful in life, but also that most believe they have the power to succeed.

POWER does not shy away from the realities of structural oppression identified by the late Black feminist scholar bell hooks; rather it illuminates how Black women exercise agency to create meaningful lives. Success is not an anomaly, but a defining characteristic. Black women have amassed power–now, Elder posits, they need to acknowledge it and then wield the hell out of it.

ABOUT THE AUTHOR:
Charity C. Elder is an award-winning journalist and media executive with twenty-plus years working and leading in broadcast and digital newsrooms. Selected and profiled in 2017 for NYC Media’s Vanguard: Women in Media, in 2016 she was named on Folio magazine’s list of top women in media. An instructor at Fordham University in New York City, Elder frequently writes and speaks on Black women in the United States.

In 2020, Elder served as a senior adviser to the Mike Bloomberg presidential campaign–– advising and strategizing ways to engage the Black community. Prior to joining the Bloomberg campaign, Elder was the Head of Video and Podcasts for Yahoo News, leading an award-winning team of innovative producers redefining news in the era of immersive journalism. Elder worked for more than a decade, as a television news producer, on Emmy award winning morning shows at both CBS News and NBC News.

A Bachelor of Arts in Sociology from Trinity College and a Master of Arts in Mass Communication and Journalism from New York University, Elder serves as a Trinity College Board of Fellows and on the Jeremiah Program’s National Governing Board of Directors, a nonprofit that aims to break the cycle of poverty for single mothers and their children two generations at a time.