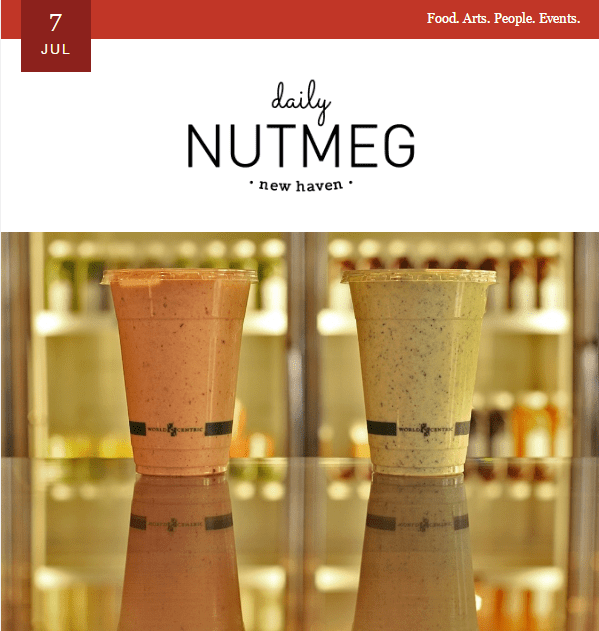 Written and photographed by Daniel Shkolnik.
Shortly after the invention of the electric blender came the invention of the smoothie. Unrelated to the old Smoothie factory, which once made undergarments and was turned into apartments some 15 years ago, this family of pulverized refreshments seems more popular than ever, offering the flavor and nutrition of fruits, veggies and other whole foods in a convenient drinkable form.

Of course, they’re even more convenient if you aren’t the one who’s making them. Here are four New Haven spots that’ll do the hard smoothie work for you.

The Juice Box (1092 Chapel St, New Haven; 203-562-0068), the newest smoothie-monger on the block, sports a chic minimalist aesthetic with a large stand-around table, copper-caged pendant lights and a black-and-white mosaic counter. Using touchscreen tablets instead of conventional registers and making its own nut butters, this place hawks nature’s bounty the Millennial way. Here, smoothie #2 ($8) is a must-try. Made from dates, agave, almond milk, almond butter, banana and cacao, the chewy bits of date and agave syrup provided the first wave of flavor, soon to be replaced by another: of chocolaty cacao and banana, creating the unmistakable feeling of eating a banana split.

Blended behind a counter tucked into Sherman’s Alley, the B-Green ($6.50, $7.25) at B-Natural (1044 Chapel St, New Haven; 203 773-1343), made from avocado, kale, pineapple and apple juice, delivered healthy stuff without tasting like it, as the tangy-sweet pineapple and apple flavors dominated the kale and avocado. But if you want something more savory, the Peanut Butter Banana Smoothie ($7, $7.95) is one to try. This deep-mauve mix was like a liquid PB&J (with extra PB), where blueberries provided the J and some added hemp protein even gave it a slightly bready edge.

A little further down Chapel, with a “make your own smoothie” poster taped into one window, Claire’s Corner Copia (1000 Chapel St, New Haven; 203-562-3888) lets you customize your smoothies with six different kinds of milks, three juices, five fruits, seven veggies and nine quirky extras like chia or flax seeds, ginger, rolled oats and others, with prices varying based on the complexity of the concoction. Regular customers often develop a personal favorite, which then becomes their signature delight. A few of those have even gotten adopted into CCC’s family of specialty smoothies (usually between $7.50 and $9 depending on the blend, a server says).

The anointed include Ellen’s Ecstasy, Emma’s Energy and Dickie’s Bulldog—the latter a protein-packed drink for a Yale football player whose mother worried he’d be getting all his protein from steak, burgers and other cholesterol-heavy foods. Then there are house-conceived specialties like the vibrantly orange Carrot Top. Made from carrot, mango and orange juice, it was slightly bitter and its flavors hard to place, but it offered a more refreshing way to load up on Vitamin C and beta-Carotene than swallowing a pill.

Cositas Ricas (271 Grand Ave, New Haven; 203-782-4757), the final stop on our smoothie safari, is located along the main artery of Fair Haven, on flavorful Grand Avenue. This convenience-store-turned-fruit-hut is home to Mangonadas and Chamoyadas ($5, $8), two summer delicacies born from a counterintuitive mixture of mango and hot spices. Scoops of mango Italian ice are layered with Valentina hot sauce, chamoy sauce (made from pickled fruit) and Megalito’s sweet and sour chili powder. The Mangonada is topped with a high collar of fresh mango slices while the Chamoyada comes with a frill of dried mango slices and a pike-like straw coated in a thick, sour-sweet tamarind paste tossed with a spicy red powder.

While these smoothie cousins are a must-try at some point, they may not be the unmitigated cooling agent you want on a blistering summer’s day. But Cositas Ricas has you covered there, too, selling fresh fruit smoothies ($5, $6) that should hit the spot. Customers create their own from an array of ingredients behind glass, like the papaya, grape, blueberry, pineapple and honeydew I chose, or the cantaloupe, watermelon, mango and strawberry I didn’t. The end result could very well have come from a palm-topped bar on a Caribbean shore.

The only thing missing was the rum.