Crepes Choupette — opened last year by Adil Chokairy at 24 Whitney Ave. — is among the nearly 90 commercial tenants in the Yale University Properties’ portfolio. More than two-thirds are owned by local and regional retailers and restaurateurs.

Walk along Whitney Avenue from Grove Street on a typical Saturday afternoon and you will find many people from campus, nearby neighborhoods, and beyond who are enjoying the area’s mix of restaurants, shops, and community arts venues. The foot traffic is hailed as a good sign for business — and that, in turn, is a good sign for New Haven’s tax base, which has grown stronger over the past decade.

Among the places drawing crowds on lower Whitney is Crêpes Choupette, opened last year by Adil Chokairy at 24 Whitney Ave. as part of Yale’s University Properties portfolio. An immigrant from France who came to America in 2005, Chokairy moved to New Haven from the suburbs in 2013. In 2014, he began pedaling a crêpe cart attached to a bicycle. Chokairy has since built on the cart’s success at his café on Whitney — where, he reports, take-out and sit-down business is strong during the weekdays, on evenings, and weekends.

Chokairy’s story illustrates how New Haven has become a “city transformed,” as it was described in aWashington Post article in 2014, which also touted the Elm City as a place “with Boston’s historic charm, Philadelphia’s artistic pleasures — and Buffalo’s beer prices.” The New York Post has said, “Connecticut’s capital of higher learning is getting its second wind,” while a New York Daily News headline proclaimed: “New Haven is happening.” Noted restaurateur Mario Battali described New Haven as “cosmopolitan and yet comfortable,” when he and his partners opened Tarry Lodge New Haven as a tenant of University Properties in the Broadway District in November 2014. 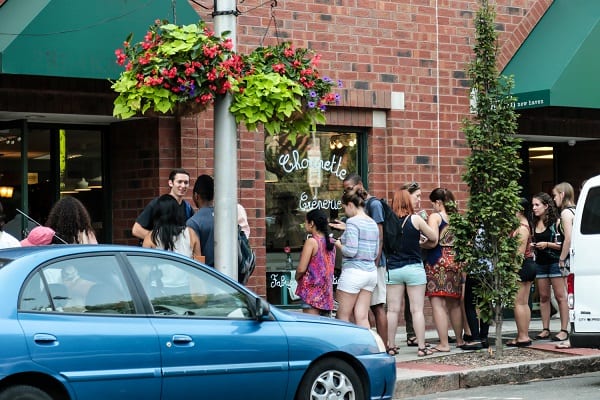