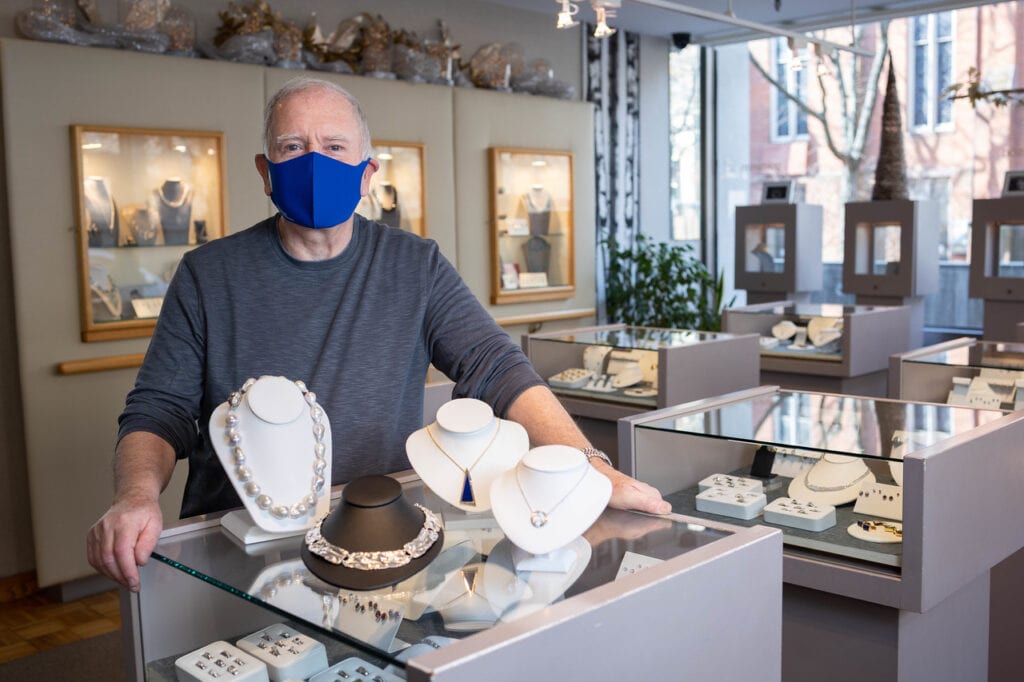 Derek Simpson Goldsmith commemorates their 50th anniversary with a special offer through Sunday, February 28 – 20% off all jewelry in stock!

Derek was born and raised in Sheffield, Yorkshire, England, where he attended the Sheffield College of Arts & Crafts and graduated with a national design diploma from the School of Silversmithing. He then was awarded a scholarship for a post-graduate degree at The Royal College of Art in the School of Silversmithing and Jewelry in London. After graduating, Derek worked in the studio of well-known American jeweler, Bert C. Gore, in Paris, France. Upon his return to England, he taught metalwork as a professor at the Rotherham School of Art and later at Mid-Cheshire College of Art & Design as the head of metalwork. Derek relocated to the United States in the fall of 1970 to be closer to family.

Derek Simpson’s dream of opening his own jewelry store became realized when the owner of a bookstore located at 155 Park Street in downtown New Haven agreed to lease him a small retail space in the front of his business. Derek Simpson Goldsmith officially opened for business on January 1, 1971.

As his business and inventory grew, Derek needed a larger storefront and desired a location where there was more foot traffic. In 1974 on the invitation of Henry Broude, a Yale professor and advisor to the then president of Yale, he relocated to a retail space at The Yale Center for British Art at 46 High Street while the museum portion of the building was still under construction. The Yale Center for British Art, designed by well-known architect Louis Kahn, was a perfect fit for Derek Simpson who as a master jeweler was in many ways an artist himself. Derek relocated to 1094 Chapel Street in 1994 and has remained there since, operating the jewelry store with his wife Pamela and current longtime manager Gene Dostie.

Over the past fifty years, Derek has created a number of significant pieces, including a silver pillbox for H.M. Queen Elizabeth II in 1976 with nine squares etched into its lid representing New Haven’s city plan commissioned by The City of New Haven and presented to the queen during the U.S. Bicentennial festivities in New Haven. Derek has also been commissioned to create pieces for composer Leonard Bernstein, cuff links for architect Philip Johnson, a pin for tennis player Chris Evert, a necklace for actress Olivia Newton-John, a necklace for Patty Smith and an earring for tennis player Andre Agassi.

“Derek Simpson Goldsmith has survived the test of time by focusing on our goal of providing the utmost quality and service to our clients. We have become our client’s source for celebrating the most special moments of their lives,” said Derek Simpson. “I appreciate my landlord Yale University for their efforts and partnership over these many years and for their most recent support during the pandemic. I feel very fortunate to have served the Greater New Haven community for five decades,” added Simpson.

To celebrate this special milestone Derek Simpson Goldsmith is offering 20% off all jewelry in stock now through Sunday, February 28, 2021! Derek Simpson Goldsmith, located at 1094 Chapel Street, is following all CDC Guidelines for a safe visit. They are open 12:00-5:00pm, Monday-Saturday and by appointment for a private shopping experience.

“We congratulate Derek Simpson Goldsmith on this significant milestone. Like Derek’s jewelry, his business continues to withstand the test of time. We are honored to have served as his landlord for most of his fifty years in New Haven and celebrate this wonderful anniversary with him and his entire team,” said Lauren Zucker, Yale University Associate Vice President for New Haven Affairs and University Properties. “Yale University’s community investment program supports independently-owned businesses, bringing jobs to New Haven residents and expanding the city’s tax base.”

Parking
Ample parking for The Shops at Yale is available at four convenient surface parking lots adjacent to stores and restaurants — 255 Crown Street, 161 York Street, 56 Broadway and 40 Dixwell Avenue. Directions can be found at TheShopsatYale.com/Parking. On-street parking is available throughout the city, with the ability to accept payment through credit cards or mobile app.