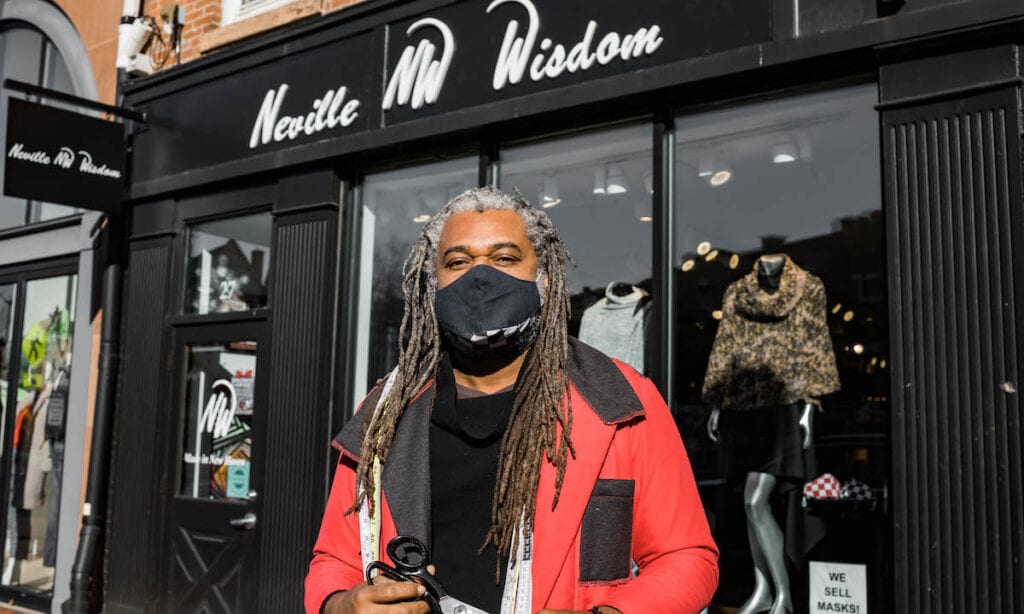 New Haven, Conn. — Yale University Properties welcomes Neville Wisdom Design Studio to a new location at 27 Broadway at The Shops at Yale. The new location makes Wisdom’s dream of combining his retail storefront with manufacturing on one floor in a downtown location a reality. Situated next to J.Crew and Lou Lou Boutiques, the location is just the right fit to house Neville’s sewing machines, computerized pneumatic fabric cutting table, and other specialty machines while allowing room for retail space in the front section of the store.

A New Haven resident, Wisdom was born and raised in Jamaica where he taught himself the basics of making practical clothing before being mentored by a local designer who introduced him to women’s fashions. In 2000 he came to Connecticut and trained to be a surgical technician, which landed him a job in New Haven at Yale New Haven Hospital. Several years later, against the advice of family and friends, Wisdom decided to pursue his dream of becoming a top fashion designer. He opened his first retail storefront in the Westville section of New Haven in 2007, which was also the location of his separate manufacturing facility. He designs custom clothing for a local and loyal following of women and men. Additionally, Neville offers custom design services, tailoring/alteration services, classes, and a design incubator, where those interested in a career in fashion can work alongside him and receive one-on-one advice.

“My new location on Broadway is ideal for my business and will be more efficient for me to operate since my manufacturing and retail is in one location, on one floor. I never had anything like this before,” said Wisdom. “Customers can now see us cutting and stitching their clothing and become a part of the design process if they choose to, or select one of the many premade fashions ready for sale. I am grateful to be a part of The Shops at Yale and value having a landlord like Yale University, which has helped me throughout this transition and continuously supports me and other local merchants, especially during this pandemic,” added Wisdom.

Designer face masks became a big part of Neville’s business during the pandemic and, in September, were featured on NBC’s The Today Show. During the months of November and December, as part of a downtown holiday promotion, shoppers can get a free face mask from Neville Wisdom Design Studio when they spend $150 or more at participating retailers at The Shops at Yale.

“We are delighted to work with Neville as he continues to expand his business,” said Lauren Zucker, associate vice president for New Haven affairs and university properties. “He is a New Haven treasure and we wish him continued success. Yale University’s Community Investment Program supports the growth of independently owned local businesses, reinvigorating New Haven’s downtown and expanding the city’s tax base.”