THE MASTER AND MARGARITA

THE MASTER AND MARGARITA

From the Novel by Mikhail Bulgakov 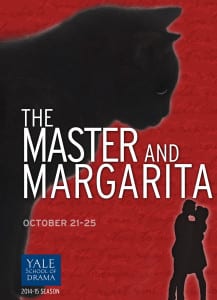 In Soviet Moscow a nameless writer is persecuted for his play about Pontius Pilate and Jesus Christ. His lover makes a bargain with the Devil to save him. The Prince of Shadows arrives in the city accompanied by a witch, a deadly assassin, and an enormous talking cat, and this diabolical retinue soon wreaks havoc.  Mikhail Bulgakov’s epic and compassionate tale sweeps from ancient Judea to Stalinist Russia to the moment of the apocalypse, testing the power of love, faith, and forgiveness to transform a broken contemporary world.